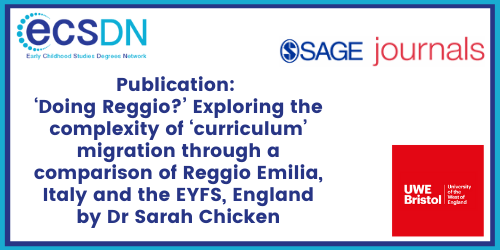 Abstract
This paper begins a quarter of a century ago with the first visit to the UK of the Reggio Emilia exhibition ‘The Hundred Languages of Children’ and initial interest by some of the early education community in ‘doing Reggio’. Within the same period, the move to introduce a formal curriculum for young children in England and Wales began, initially with the Desirable Outcomes documents in 1996 (SCAA) and more recently with the latest incarnation of the Early Years Foundation Stage. This paper first explores key aspects of the Reggio Emilia approach before turning to the development of the curriculum for young children within England, making visible key differences between these two ways of working. Drawing on Foucauldian discourses, I aim to demonstrate that curricula models are underpinned by socially constructed discourses and that as the discourse of ‘school readiness’ has tightened its stranglehold on early years policy within England, the likelihood of ‘doing Reggio’ has been eroded significantly.

Birth to Five Matters in Practice with Marie Bradwell and Julie Jones: Episode 2

Birth to Five Matters in Practice with Marie Bradwell and Julie Jones: Episode 1